I host a talk radio style podcast for Boss and it’s free! At the moment there are 38 interviews posted and 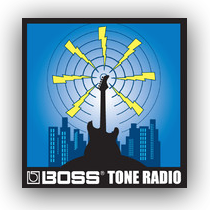 more coming all the time. Herman Li of Dragonforce is the latest.

When I interview guitarists I do it as a musician interviewing a musician. I don’t think these interviews are quite like an average guitar magazine interview. Plus you can listen to the guys voice, way better than a written interview. Some of my favorite shows featured: Rusty Anderson from Paul McCartny’s band, Andy Summers, Steve Lukather, Rick Derringer, Marty Freidman… and so many others too… click the logo (right) to go there.

I did a real interesting project called “Pedals That Make the Tone”. This spanned about four years. Each month, corresponding to the issue of Guitar World Magazine, I describe which Boss pedals you can use to get the tone of that month’s song transcriptions.

I researched, then wrote about what the player used and I described how to get his tones. Then I recorded a sound-alike audio clip using the pedals I suggested. Since there were five songs per month for four years that means I covered about 240 songs. Click the pic (left) to go to the page bosses.com/tone. Then click the “Tone Index” button. At the Tone Index you can sort by month, song or artist. It’s very educational about tone, gear and famous players!